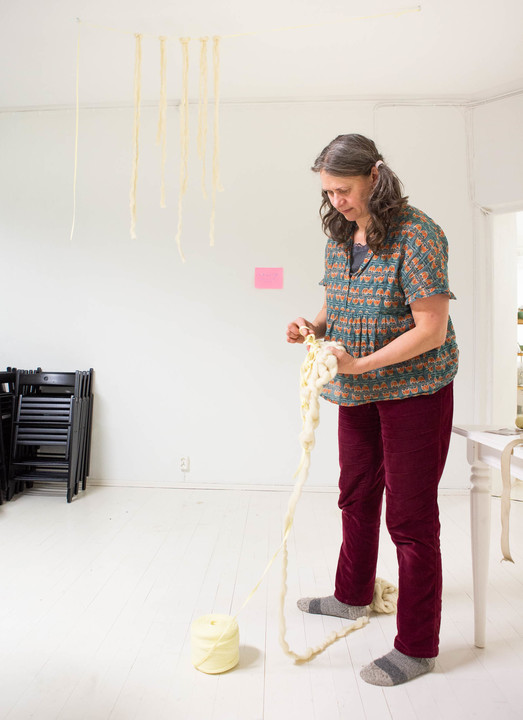 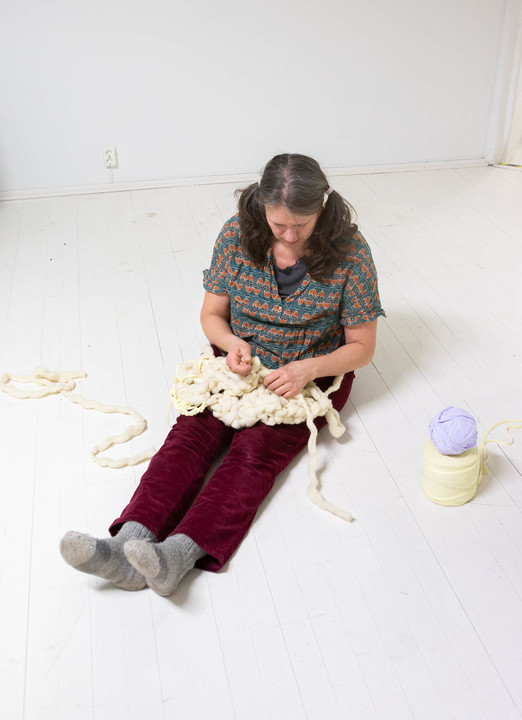 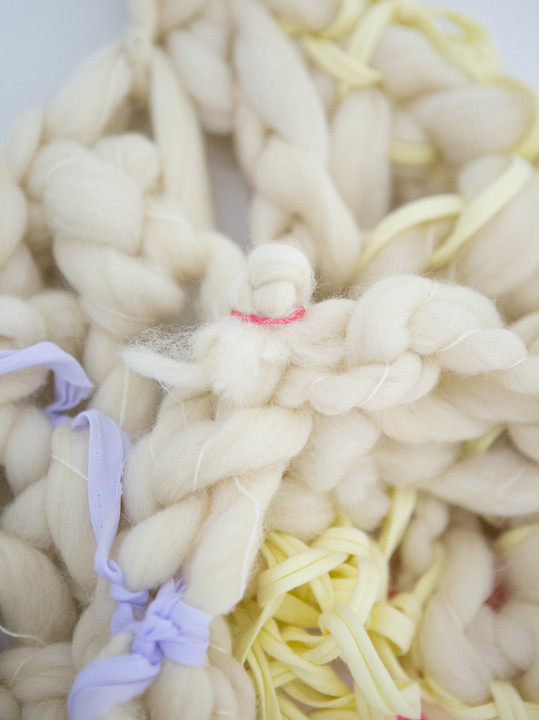 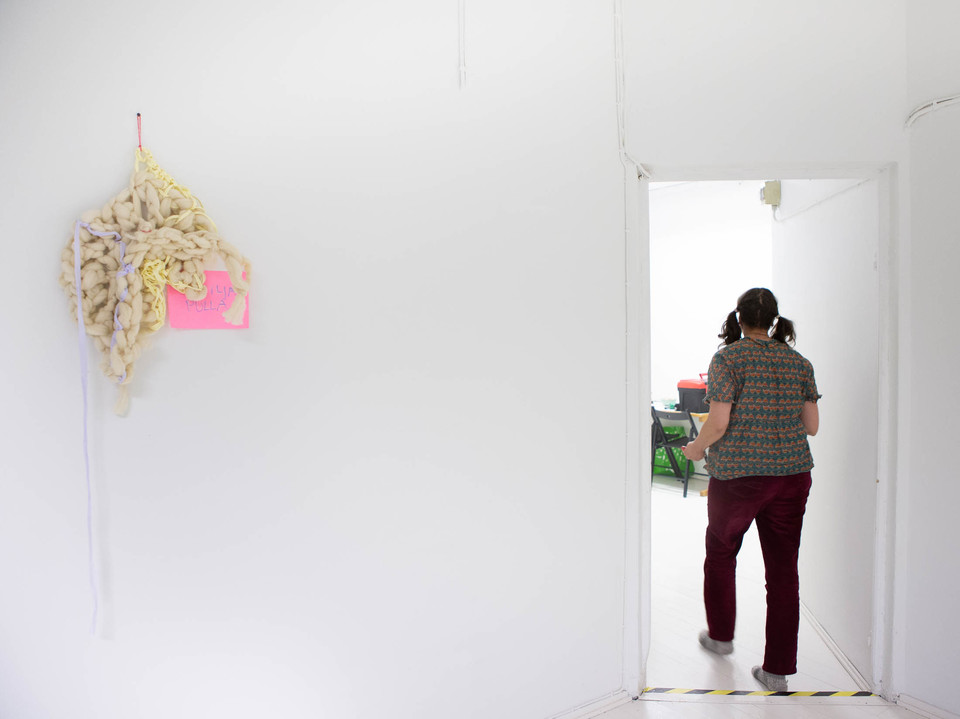 During the first month of residency at SOLU, I would repeatedly walk around the rooms and breathe in, sensing air. I would go into corners, next to windows, crouch down on the floor, climb ladders, to pick up variations of atmosphere and whiffs of smells.

Observation
The room immediately by the main entrance was usually very neutral. I only picked up a variation of smells right at the door (cold fresh air from outside whirling with the smell of rubber, mould, and microbes from the carpet on the steps). However, each time I walked along the wall to the left of the entrance, I picked up a buttery smell of milk, sweet wheat-bread fresh from the oven (pulla), and vanilla. I would literally press my face to the wall and the smell would be there, very distinctly, in the wall. I tested if the smell came from the kitchen or from the ventilation system and somehow packed around that area. I checked if there might be something on the other side of the wall. But no, the smell came from the wall itself.

In my mind’s eye, I saw whitish shining dough of wheat, buttery yellow in places, flowing in cascades - protruding from the wall.

Telling Erich about this, he mentioned that the space had once housed a dairy store and possibly a bakery. I began to interest myself in the history of the house, Klinten. It is across the street from the former Katajanokka prison (now a BnB). I heard a rumour that Klinten used to be one of the houses where the Russian soldiers were stationed. I also know that Katajanokka had its own concentration camp during the end game of the bolshevik revolution 1917-1918 – a satellite camp to the big one on Suomenlinna. I wonder how many lives were taken on this little peninsula. 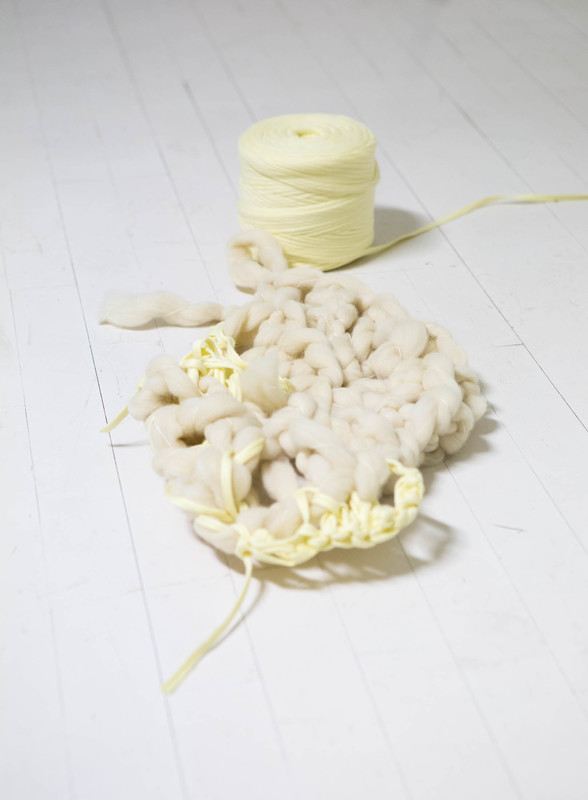 I followed the inner image I had, of the pulla cascading from the wall. I spent hours looking for the right kind of whitish, lame, yellow, reminding me of cream. Milk also has streaks of lavender-ish blue. I suspended thick whitish wool yarn from the ceiling. I hated it immediately. I walked around a bit, left the room, came back, looked at it again. Testing if I might accept it.

An hour later, I tore the yarn down. Sat on the floor and started crocheting with my fingers, using the thick white wool. This white wool annoys me so much! I made a semi-elliptical shape. Needing to break the white fluffy cuteness of the wool, I picked up the whitish yellow cotton yarn and knitted tight stitches into the fluffy white. Eventually the whitish yellow yarn had curled like souring cream around some of the edges of the fluff. This made me feel more content. I was on the right way. I built up a white fluffy ridge perpendicular to the semi-ellipse. And followed with the curling cream.

I put this white object/sculpture on the floor and looked at it for a while. Pulled it around its edges to see how it could be shaped. It was still too cute. Why is it that vanilla makes us think of white, when indeed it is in all actuality dark brown.

That is not how I see the colors of smells anyhow. Usually the smell evokes a color, not a material or thing. The color is more akin to the energy or ontological quality of the smell. But sometimes the smell is so vividly, viscerally and/or mentally, connected to a memory, which then overrides the synesthetic sense. And this memory is often about an object or material, in this case, pulla. And pulla is usually whitish yellow.

It annoys me that this memory is interfering with my investigation of the smell. It is as if my childhood was seeping into the spaces of the house and all of Katajanokka.

The next night, I dreamed of having lived my childhood in the 1930s Katajanokka. I was there with my mother and grandmother. They were playing with me as I rode a sleigh (pulkka) down the steep hills.

This evening in Solu (19.02.2019), I have been working on the object/sculpture for half an hour now. I look at it again - at its pulla-likeness. Why does it have to be white? What is missing? I knit in lines of lavender blue. They make me feel content again. Better.

I look at the object/sculpture again. I connect with the space and the memories contained in the smell in the wall. I see two drops of blood fall into a bucket of milk. The drops swirl and disappear in the milk as a woman whisks the milk.

Following this impulse of he blood, I pick up two dark pink rubber bands. One of them I twist around a wad of white fluff. The other, I twist around the end of the semi-ellipse. It serves as a wall attachment.