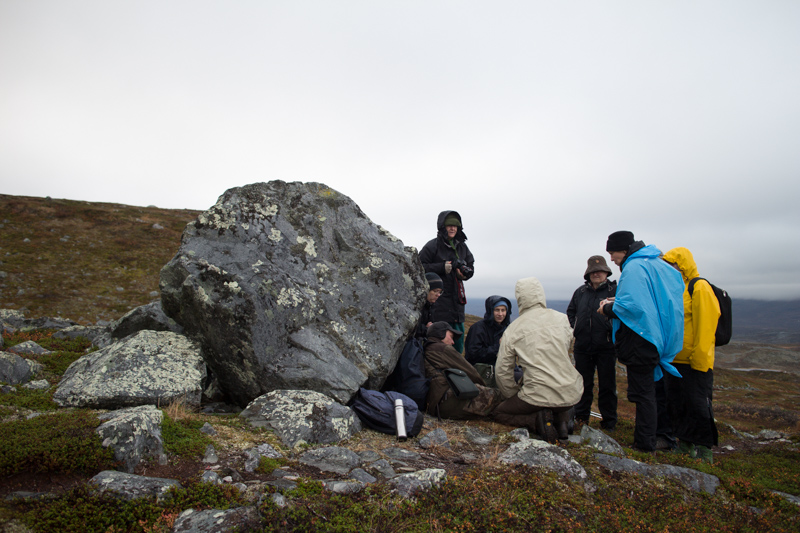 
Landscape is a dynamic product of culture and a given environment. It results from a response over time from the way land is used and treated. The intention of the group is to follow time in a living landscape from the perspective of the local reindeer herding tradition. We will experience the landscape and identify the traces in the surroundings as the signs of the Sami culture. We will feel and discover the past and the present in a view, which looks without bias. Important leads will be the springs, the old fireplaces, plants in a place where people and reindeer have stayed and later moved on. In this group we will stay outside and walk in the tundra. Being in the field, the time and its´ different effects will reflect in own our body. We are looking for the sense and the idea of living in nature and feeling its´ time.

Leena Valkepää (FIN)
D.A. artist and researcher Leena Valkeapää lives in the wilderness in the northwest Lapland. Her doctoral dissertation In the Nature, a dialog with Nils-Aslak Valkeapää´s art (2011) proposed a dialogue with nature and its poets. Se has exhibited as a visual artist since (1988) and has produced public environ-mental artworks, including the rock wall piece Ice Veil (1999) in Turku. Leena Valkeapää works as a visiting lecture in the Department of Art in Aalto University. She writes a regular column to Lappish newspaper Lapin Kansa.
http://leenavalkeapaa.net/

Johanna Rotko (FIN)
She is a visual artist and a photographer who combines graphic design and typography and makes time-lapse movies about nature. She is currently based in Helsinki and studies Master’s Degree in New Media in Aalto-university School of Arts, Design and Architecture. Rotko’s art has been shown for example in metro of Paris and also in Nature Museums in Finland. Her work explores the unity of human and nature. In her ”Still Life Nature Laboratory” -project she has focused on how human medicines affect to plant growth. Still Life -projects contains compositions that she has developed during several months.
http://www.johannarotko.com

Minna Pöllänen (FIN)
Finnish artist living and working in London and Helsinki. Pöllänen’s practice combines and moves between photography and site-specific sculptural intervention. Her sculptural works are often temporary by nature and realized outdoors. Pöllänen’s thematic emphasis is on the notion of landscape and the ways in which it is perceived, stereotyped and commodified. Pöllänen holds an MA with distinction in photography from London College of Communication. Her works have recently been shown in Brooklyn Bridge Park, Quartier Des Spectacles in Montreal, The Photographers’ Gallery in London and the 20th Mänttä Art Festival in Finland.
http://www.minnapollanen.com

Till Bovermann (DE)
Till Bovermann studied "Computer Science in the Natural Science" (majoring in robotics) and received a PhD in 2010 for his work on tangible auditory interfaces. Till currently works as a post-doctoral researcher on tangible and auditory interaction at the Media Lab Helsinki, Aalto University where he runs TAI-stuido.org. With the DEIND project (in which he serves as the principal investigator), he aims to facilitate contemporary electronic and digital music practice for people with autistic spectrum disorder.  Till has been teaching at various institutions, among others at IMM Düsseldorf and the Institute for Time-based media, UdK Berlin. Till’s artistic works are mostly concerned with the relationship between contradictory systems such as the digital and physical realm or noise and harmony. Alongside his academic and artistic work, he also develops software in and for SuperCollider. http://tai-studio.org/

Perdita Phillips (AUS)
She is an Australia environmental artist who works across mixed media installation, walking, sound, site-specific environmental projects, book art, sculpture and photography. Underlying her works is the question of how to represent and transform the relations between humans and nonhuman worlds. She has investigated many phenomena including thrombolites, termites, bowerbirds and salmon gum trees. Her PhD was entitled, fieldwork/field-walking: art, science and sauntering in the walkingcountry (2003-2006). Recent practice has been concerned with how to engage with complexity in the environment and encourage the viewer to walk away more confident and flexible about the environmental uncertainties that are facing us.
http://www.perditaphillips.com